On January 19, 2017 the Rotary Rose Parade Float Committee was thrilled to hear Lance Tibbet, President of the Pasadena Tournament of Roses, announce “Making a Difference” as the 2018 Rose Parade theme to promote recognition of the good work of volunteers.  What a perfect blend for a float promoting Rotary and the works of its volunteers!
Two days earlier on January 17, 2017 Rotary International President Elect Ian H.S. Riseley announced to Rotarians at the International Assembly the 2017-2018 Rotary theme “Rotary:  Making A Difference.”  President Elect Ian explained to attendees that “In Rotary we know we can do more together than what we can do alone…we are united in our common goals…it is Rotary making a difference to build stronger and more active clubs that serve in better and more lasting ways.  It is believing in a Rotary that is recognized for the good work that it does.  A Rotary that will continue to grow, to endure, to go from strength to strength – making a difference to our communities, our countries, our world and our souls.  This is what we will achieve next year – “Rotary Making A Difference.”
The Rotary Rose Parade Float Committee (RRPFC) is sustained by Rotary Districts 5300, 5190, 5240, 5280, 5320, 5330, 5340, and 5500 and receives no funding from Rotary International.  The decorators and members of the committee represent over 26 Rotary Districts in the USA and Canada and donate hundreds of hours to insure we have a beautiful and successful float. The Rotary eClub of Arizona along with many other Rotary clubs have donated funds to help sponsor the float and we encourage everyone to enjoy the message we share with the world through this great event. 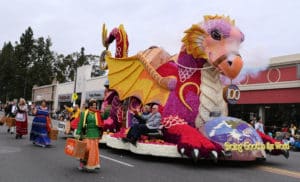 The float theme is “Doing Good in the World”. The 2017 Float promoted and celebrated the 100 years of The Rotary Foundation. The Foundation empowers Rotarians to travel throughout the world and create and complete projects which serve people in need in six areas of focus which are: promoting peace, fighting disease, providing clean water, saving mothers and children, supporting education, and growing local economies. The spectacular and colorful dragon is clearly a world traveler carrying luggage decorated with the six symbols of the areas of focus. The Dragon also is proudly wearing a necklace with a medallion marked 100 for the 100 years of service.

To learn more about our Rose Parade Floats visit https://www.rotaryfloat.org/history/