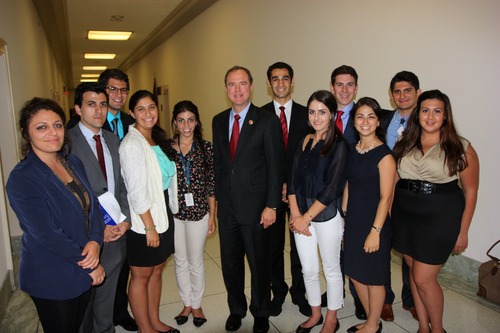 Global grant scholarship recipient Lusiné Mehrabyan is working toward solving one of the most difficult and pervasive world ills: government corruption.

Mehrabyan, a native of Armenia who was raised in Ithaca, N.Y., recognized the plague of corruption in her home country but also in the U.S. public sector.

“I think it’s common in every country, and it’s something that should be addressed,” she says. “It’s very difficult, because it’s hard to measure.” Mehrabyan hopes to establish better ways to do that.

She recently earned a master’s degree from the London School of Economics (LSE) and further developed her interest in fighting corruption while working with the Organization for Economic Co-operation and Development (OECD) in Paris in the summer of 2016.

Q: How did fighting corruption become an important focus for you?

Q: What was the focus of your internship with the OECD?

A: I worked in the division called Public Sector Integrity. Because of the quantitative skills I obtained at LSE, my task was to help with the empirical evidence in their research. I worked with my supervisor to show what happens to productivity levels in a country if there’s corruption in the public sector. I also created an index to measure conflict of interest and different trends, such as whether there’s more conflict of interest or less if you are very punitive as a country.

Q: What did you learn?

A: I realized we need to look at different methods and different approaches to measure corruption. I’m doing research to see whether corruption is intuitive or deliberate. This is a question that has not been explored, and it is a critical question. If corrupt behavior is intuitive, you can change the environment in small ways. But if you learn that corrupt behavior is actually deliberate, then you have to do more of the traditional policy approach, which is sanctioning and punishing people who do corrupt work.

A: Since I moved here, Brexit happened, and I realized that a lot of people felt alienated from the discipline of economics. I’m trying to bring economics to the public sphere, using a touch of mysteriousness and a touch of spontaneity and fun to make it interesting to people. The idea is to use a guerrilla-style lecture format – I guess you could call it “pop-up economics.” The location is secret, the topic is secret, the occasional guest speakers are secret. In a very engaging, immersive way, people are going to be introduced to different economic concepts. The main aim is to get people to be more engaged citizens and to hold our politicians more accountable.